Where I’m living and going to school

The other day, I walked around and explored the campus and the apartment complex where I am staying.

My apartment is located in the northern part of the city and is somewhat separated from the city by a forest that is actually part of a national park called Djurgården.  However, Stockholm University is nearby, and it is only a short bus ride to the Tunnelbana station for that school.  On the Tunnelbana, it is only a five minute ride to the KTH campus and about ten minutes to the city center. 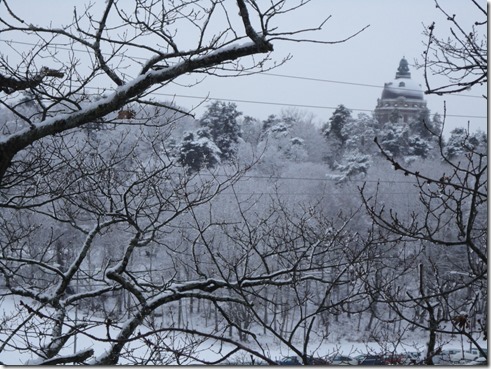 The forest next to the apartment, with Naturhistoriska Riksmuseet in the background

The apartment complex itself is rather large and consists mainly of student housing.  The building I live in is mostly international students, and contains private bedrooms/bathrooms with shared kitchens.  There’s a small grocery store and a restaurant in the main courtyard of the apartment.  In addition, there is a sauna, because saunas are very popular in the Nordic countries; there is even a sauna on campus!  There are also trails that go through the forest as well as one that goes down to a beach – although I don’t plan on going swimming there anytime soon…

The school I am going to this semester is called Kungliga Tekniska Högskolan, or KTH, which means The Royal Institute of Technology in Swedish.  The motto on the school logo is “Vetenskap och Konst,” which means “Science and Art.”  This is the largest engineering/technology university in Scandinavia and it has a good reputation throughout Europe.

KTH is a fairly large school, although nowhere near as large as UT – there are about 14.000 students (in Sweden, decimals and commas are reversed).  It’s spread out over five campuses in Stockholm and the surrounding towns of Södertälje, Haninge, Flemingsberg, and Kista.  However, my courses will all be located on the main campus, called KTH Valhallavägen, which is about a mile north of the city center.  I will be taking four courses that count towards my chemical engineering degree, as well as one Swedish course.

The main courtyard of KTH

Hej – I'm Aaron! When I'm not working my regular job, I love to travel, study languages (svenska anyone?), and learn about history and culture. I'm also a "pandemic cook" attempting to learn the secrets of Indian cuisine from my apartment in Texas!
View all posts by Aaron →
This entry was posted in Sweden. Bookmark the permalink.

2 Responses to Where I’m living and going to school