My First Shopping Experience in Sweden

Today, I went to the grocery store to get some food so I don’t starve (I haven’t eaten much this week because I’ve been trying to adjust to so many other things at the same time that I would usually forget to eat, or just not realize what time it is).  I was planning on going to a German grocery store called LIDL, which is two T-bana rides away.  However, when I got to the central station and was looking for the second line to get on, I found a grocery store that is underneath T-Centralen that I went to instead – a Swedish grocery store called Hemköp.  For the most part, it was a pretty familiar type of grocery store, but here are a few things that I learned:

When I got to the candy aisle, I had to get some because I’ve never seen any candy like this before.  Apparently, Sweden is one of the countries that eats the most candy per capita in the world (even more than the United States), and their favorite candy is the loose kind that is in bins along a wall that you scoop into a bag.  So I got some. 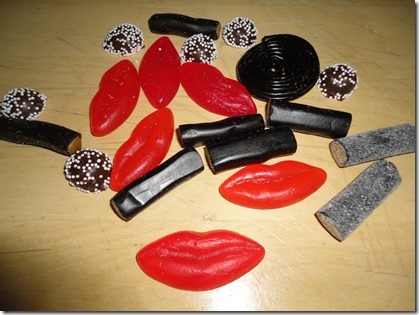 A small selection of Swedish candy

Hej – I'm Aaron! When I'm not working my regular job, I love to travel, study languages (svenska anyone?), and learn about history and culture. I'm also a "pandemic cook" attempting to learn the secrets of Indian cuisine from my apartment in Texas!
View all posts by Aaron →
This entry was posted in Sweden. Bookmark the permalink.

8 Responses to My First Shopping Experience in Sweden